He is a lone figure, bopping on the midnight waves of a blood sea.

The water is warm, red.   Some stars glitter above, and he can see dimly the cliffs of the isle, to which he approaches.

It was strangely pleasant, and for a long time, he simply drifted.

He could feel the fish nipping swimming between his legs, nipping occasionally; and the seaweed, thick as a man's arm, undulating about his legs as tentacles.   [ Feeling] Like snakes in the water.
This was the Motherland isle.  A land fabled for its mists, its mystery, its flowers and fertile soils, — and deep jungles with abundant fruit.
Seaweeds, thick as a man’s arm, were rooted in the isle’s northernmost shores and spread out for many, many miles at sea like so many hairs.   It was this that had entangled and wrecked his boat, out on the rocks.

Everything is dark, and the sea around him in which he floats is crimson thick.   The red tide.    Once every moon, at the dark time, when the moon doesn’t show, this red tide comes, and the sea herself blooms and sheds her blood like a woman’s tides.

The isle brings a heady mix of rich, floral scents, the musk of young does, and the dank earth of time swamps.
This mixed with the smells of the sea itself: of fish, seashells, and the blood of the Sea-Goddess.  Together, they are the scent of woman.
These were the scents that had lured his ship in from so many days out at sea.

So there he is, bopping in the dark, knapsack on his back.   Unhurried.   He has come from the Fatherland.    For days he sailed blindly, seeing nothing, but now and then catching a whiff, the scent of woman out across the waters.    At last he sees the ‘Motherland’ isle; there where the sea turns red.
Over the next days, he sailed around the long, queen-sized island, admiring her forms.    Her graceful slopes, her curving beaches.     As a woman.

It wasn't just the seaweed, — there'd been another reason why he'd wrecked.   The singing.   Perhaps it was because he was lonely, been without the company of woman for a long, long time, — but he could have sworn he heard the voice of a woman, singing, out across the waters.    A beautiful voice, that carried a long ways, that seemed to be almost floating, lilting, above the waves.    But it was hard to be sure, — it was maybe just the sound of the waves, of crashing surf in the fog.   But no, it seemed so much like singing, like the hauntingly beautiful voices of the mythical ancient 'Sirenes', singing out over the ocean, luring sailors ever on, to crash upon the reefs.
Which is what had happened to him, as he sailed ever closer, ignoring the ever more dense tangle of seaweed hairs that entrapped and imprisoned his boat, crashing it against the barrier rocks. 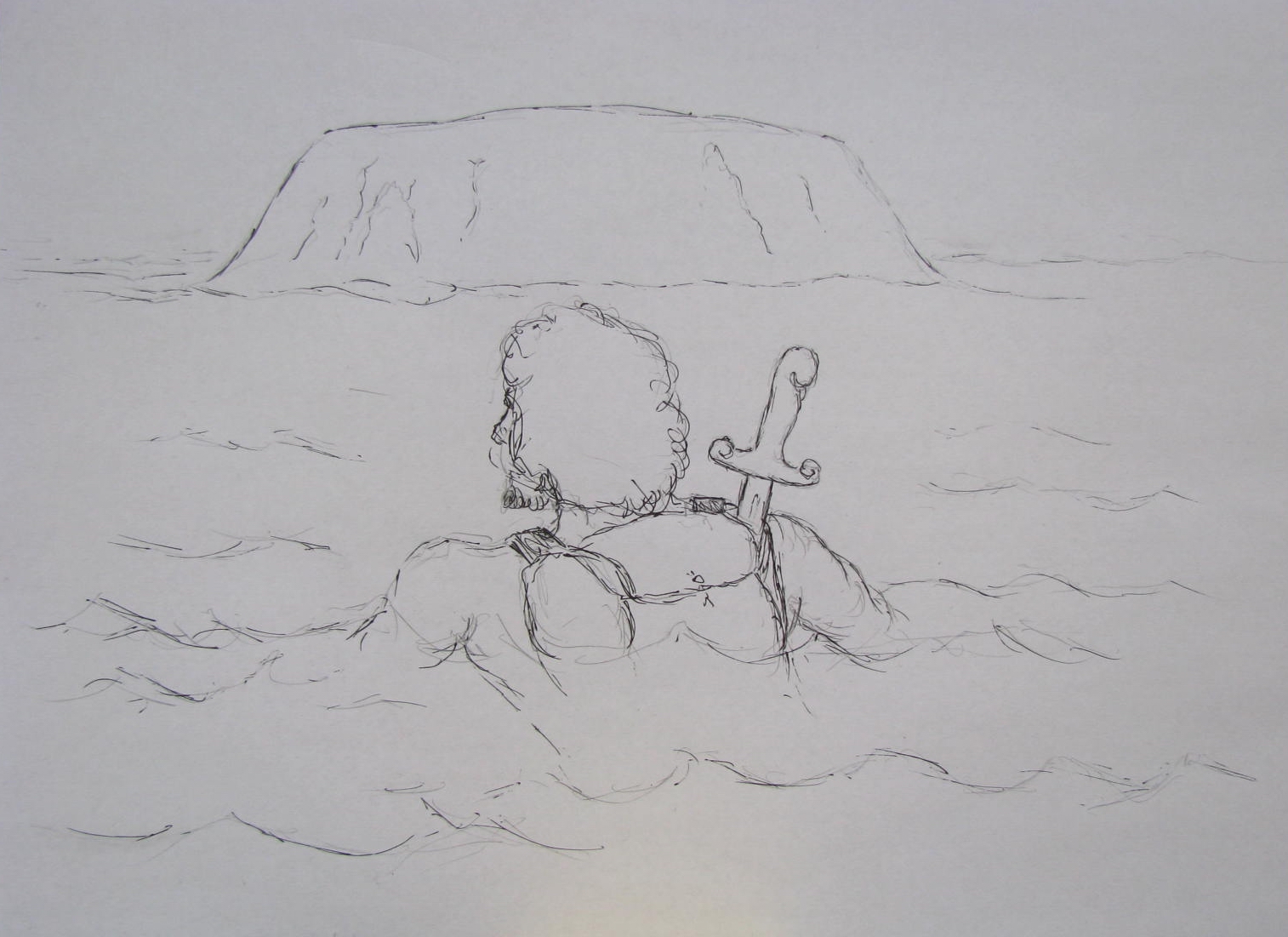