He crawled up out of the sea, to the beach.  Exhausted.
The shore was rocky and craggy where he landed.     The man shook himself like a dog, — shaking off the red tide.   He shook dry the contents of his knapsack too, ..... all his salvaged gear, ..... arrows, a flute, sword, and more.    And fell asleep on the beach. 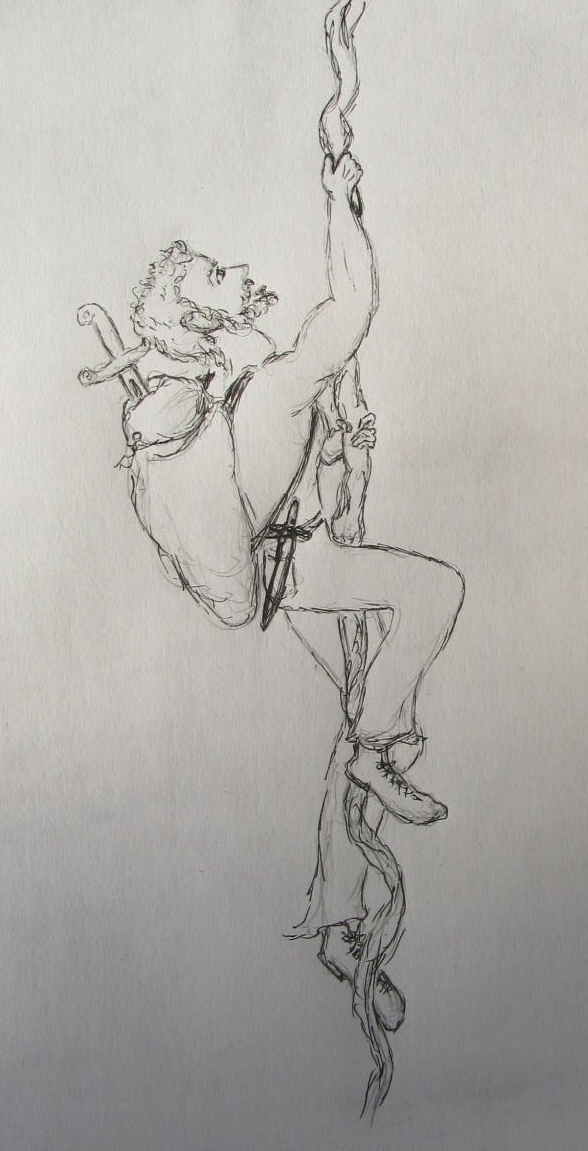 In the morning, he saw that cliffs were everywhere, sheer and high.  But a willow forest, sprouting from the top of the cliff, let down it's long, weeping, sinuous branches, mixing with hanging vines, until they reached all the way to the beach.   As if the Motherland had thrown down her long, long hair, like Rapunzul, so a sea-cast stranger may climb up to her.

And so, one hand over the other, he climbed her vines.   To the top, and then entered into the dense tangled mat of misty forest.
He spent the next day exploring the ‘Long-Haired Forest Of The Weeping Willow Trees’.

The mysteries of the Goddess are rooted here, in every twisting, sinuous, flexing, windswept branch, and in the soft whistle rustle of its leaves.    Their long leaves carressing over his back as he moved along, like a lady's fingers in the dark.

Was this not, in every way, different from the Fatherland, from whence he'd sailed?

Once he looked out over the sea, and thought he saw the remnants of his raft-like vessel, caught as it was in the hennah-stained seaweed hairs.   The willow branches hang out over the cliffs and out to the sea, merging and twisting with the black seaweed there, so that they are like long entwined hairstrands, going for miles and miles out to sea.

Tomek, — for that is the man's name, leapt, and ran with his sword through the ‘Forest of the Weeping Willow Trees’, leaping and hopping, waving his sword, his long hair, color of the sun, trailing afterwards.