Maiden on a Horse 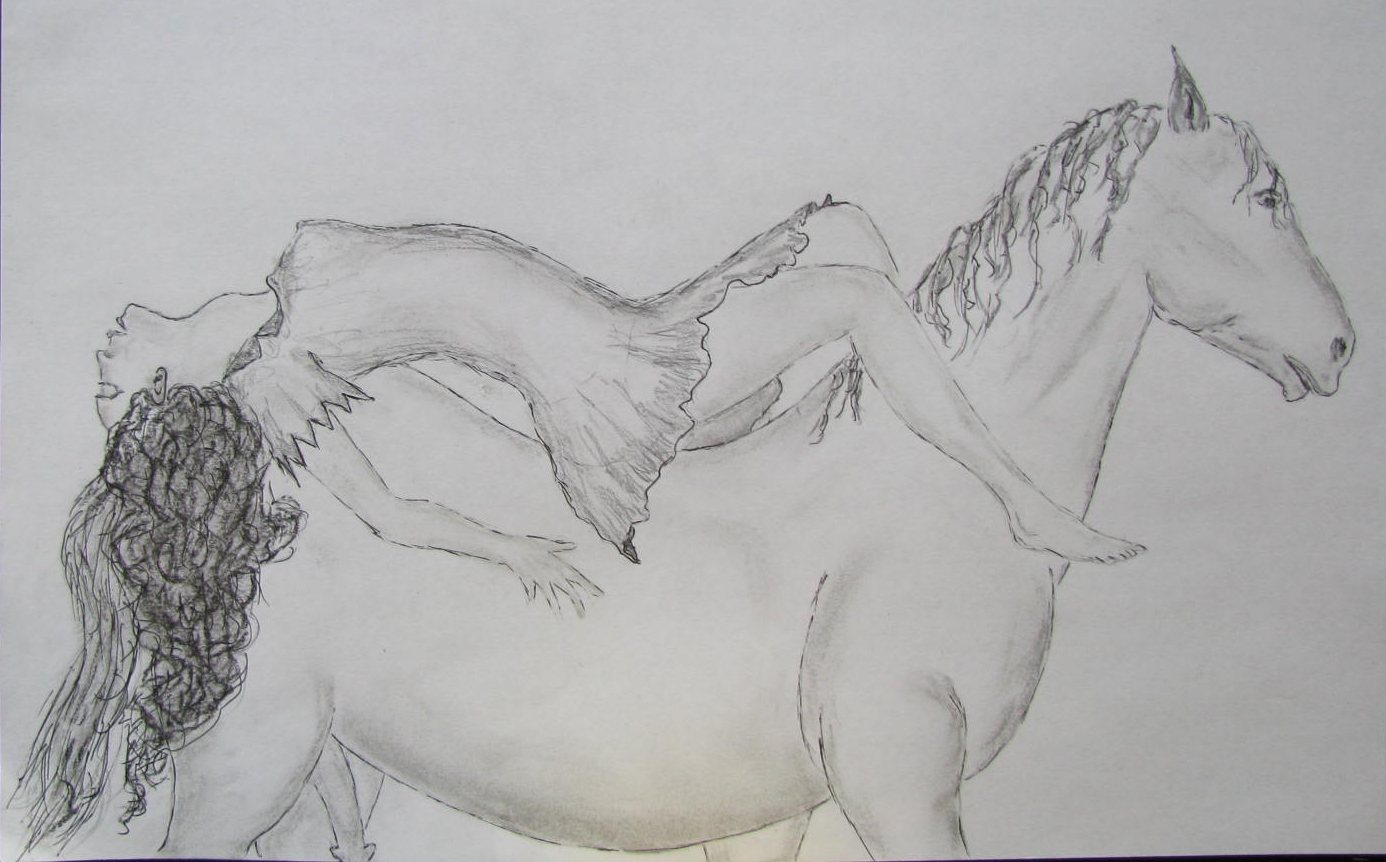 The next day Tomek lay on his back in the heather, awake after a long sleep, looking through the morning brume that hung all around him.     He'd slept in the forest of the weeping willow trees.     A wispy mist snaked through the branches, obscuring so much.    It is what the Motherland is known for.

As he lay there, lazily observing the myriad forms the branches took in the haze, he thinks.  Of how much this place smelled of woman.

Of how different all this was from the Fatherland, the isle he’d just come from.     He’d spent three years there, meditating.   Atop the Eagle Spire.  The Fatherland is a land of boulders and lizards and mushrooms and great oaks.     But it has no flowers and it is not fertile.

For three years he’d not been with women.    Or hardly seen one.   He'd been a monk.   A Shaman spiritualist.    He’d dreamt of women; — one in particular, who’d come to him on many nights, in his dreams.    A woman whose face he could not see, but whose long hair and flowing skirt blew in the wind.    It was troubling, for he was a spritual man in a life of celibacy.

He saw a movement out in the field.     It was difficult to see through the mists, the grey, ghost-like image.     But in time, he recognized a horse.    A white, Arabian horse,  with someone on it, bare legs wrapped around its neck.    The horse was grazing, its head to the grass.    As it moved forward, he could make out the body of a young woman, stretched out upon the horse, on her back, eyes closed.    Her head fell languidly back over the horse’s rump, and her very long, curly black hair blended and blew with the horse’s tail.    It was as if they shared one long ‘pony-tail’.

Her body was arched over the horse’s back, so her young breasts jutted straight up, their cone shape easily seen through the light green gauze of her halter.    Her skirt had ridden up high so that he saw quite a bit of her legs, which hugged the horse’s neck.    They were youthful legs, slim, yet with a certain meatiness to them.
Her skin was amber; a musky, radiant gold.    Much of her belly showed between her halter and her skirt.    She was barefoot.
Her hair was wild, unkempt, rarely brushed.    It was all curled up with bits of leaves and petals in it.     A peasant girl.   A Goddess.
Tomek knew the tricks the mind can play on lonely men.    Who hasn’t heard of love-starved sailors seeing mermaids in schools of tuna?

The lass’s slight movements every now and then suggested that she was at least half asleep.    At one point, she seemed to yawn, stretch her arms back, and then caress the sides of the animal.     He could not see her face well; but what he saw seemed dreamy.    Smooth, angelic.   Virginal.

Now and then she would squirm, as if she were dreaming.      As her thighs moved, her thin skirt rode up higher.     Her thighs were lush.
The horse was a stallion, you could see that by the long snake hanging, dangling, loosely in the heat, beneath him.

She tightened her legs around the stallion's neck, and this aroused Tomek.     He suddenly wanted to be that horse.    A whiff of her scent reached him.     What amazing perfume was this?   Like that of narcissus, or jasmine, or ylang-ylang.     Like that of the eager young does.
It emanated from her.    She seemed doused in it, as if she bathed with it.    Or was it, that, since he hadn’t smelled the scent of woman in so many years, it effected him so much more strongly?