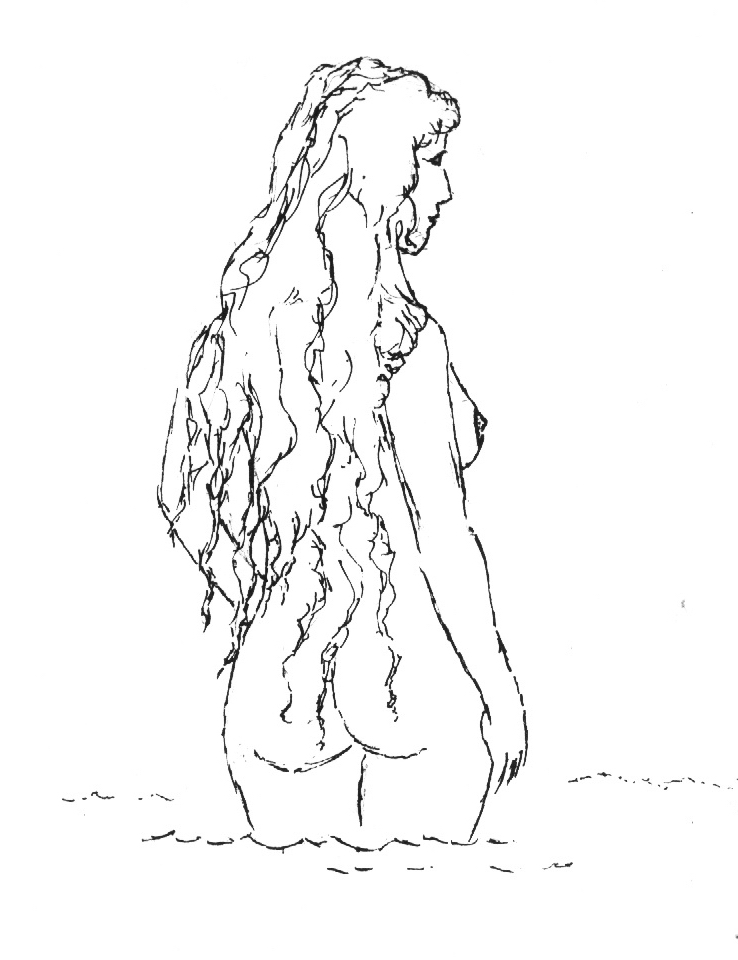 One night he saw in the distance dark a beautiful long-haired woman come down to the shore.   It was now the full moon, and in the distance he could see her outline, her silhouette.

She stepped to the water's edge.   She undid her blouse, there were so many buttons, and took it off.   Her nude round breast orbs, so perfectly smooth, with little points, shone in the moonlight.   Then she stretched, arching her slender, pliant torso and her arms way back, so her nude breasts pointed straight heavenwards, pointed silhouettes.   She shook them.

Standing straight, and moving slowly, as if in a dream,  she reached under her skirt and pulled her panties down, stepping out of them.    Then she hiked her skirt up over her head, taking it off.   She was standing nude before the lake in the moonlight.

She moved slowly into the water.   This was real woman.   A Goddess.    Her hair reached all the way down to her cute derriere.

Tomek admired her perfect form, and her grace, as she began to bathe.   Her hair spread out like silk over the water whenever she dunked herself.   He watched her skin shine in the moonlight.

She dove into the deeper water, and when she did, her buttocks jutted straight up above the water for an instant, reflecting the moon, before they disappeared beneath her splash.   That momentary flash gave Tomek an ache in the groin.   She dived back into the water and immerged again, several times, playfully.

After bathing, she stood for some time looking up at the full moon, with the water lapping at her thighs.   Her back towards him, her long hair was so dark it merged with the night, so all he could see were the round globes of her derriere, peeking out between her hair and the water.    They shone in the moonlight, with a radiance that made him think of her as a firefly.

The kind of heart men fall in love with.

No wonder it was called a fanny, he mused.   The way it fanned out so wide and marvelous from a maiden's tiny, lithe midsection.     Like a marvelously painted Japanese fan.   A work of art.     Or like the brilliant plumage of a peacock's fanned out tail.    A woman's tail was designed to fan the flames of men's passion.